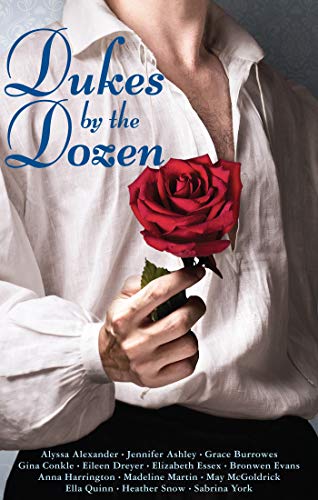 A Duke for All Seasons!
Win a tiara below! What’s better than a dashing duke? A dozen of them! In this case, a baker’s dozen—thirteen of your favorite historical romance authors have come together to bring you more than a dozen tantalizing novellas, with one per month, for a year’s worth of never-before-released romances.
Dukes by the Dozen
GET IT NOW!
Amazon
January– The Duke in Winter by Alyssa Alexander — When the highwayman demanded he stand and deliver, he didn’t know she would steal his heart.
February – The Difference One Duke Makes by Elizabeth Essex — Miss Penelope Pease is what every bright young thing never wants to be—ruined, thanks to an ill-conceived flirtation with the late Duke of Warwick. But ruined suits the new duke, his brother, Commander Marcus Beecham just fine—because after a career in the Royal Navy, he’s rather ruined himself. All it takes is one frosty night for two imperfect people to make the perfect February valentine.
March– Discovering the Duke by Madeline Martin — Reunited at a house party after a lackluster start to their marriage, the Duke of Stedton attempts to win his Duchess’ heart. Will a sizzling wager be enough to melt the frost between them, or will it truly remain the coldest winter in London?
April– The Duke and the April Flowers by Grace Burrowes — The Duke of Clonmere must marry one of the Earl of Falmouth’s three giggling younger daughters, but Lady Iris—Falmouth’s oldest, who is not at all inclined to giggling—catches Clonmere’s eye, and his heart!
May – Love Letters from a Duke by Gina Conkle — The Duke of Richland needs a proper duchess, but he wants his thoroughly fun, entirely inappropriate neighbor, Mrs. Charlotte Chatham. She’s widowed, older, and if the whispers prove true—barren.
June– Her Perfect Duke by Ella Quinn — Still suffering over the loss of his wife and child, Giles, Duke of Kendal sees Lady Thalia Trevor at a market and is instantly smitten. There is only one problem. She is already betrothed to another man. Will she defy her powerful father to marry him?
July– How to Ditch a Duke by May McGoldrick — Lady Taylor Fleming is an heiress with a suitor on her tail. Her step-by-step plan to ditch him is simple. But there is nothing simple about Franz Aurech, Duke of Bamberg. When Taylor tries to escape to sanctuary in the Highlands, her plans become complicated when the duke arrives at her door and her loyal allies desert her. But even with the best laid plans, things can go awry…
August– To Tempt A Highland Duke by Bronwen Evans — — Widowed Lady Flora Grafton must be dreaming…Dougray Firth, the Duke of Monreith, the man who once pledged her his heart and then stood by and allowed her to marry another, has just proposed. While her head screams yes, her heart is more guarded. Why, after eight years, this sudden interest? When she learns the truth… can she trust Dougray to love her enough this time?
September– Duke in Search of a Duchess by Jennifer Ashley — The meticulous Duke of Ashford is dismayed when his children inform him they’ve asked the young widow next door to find Ashford a new wife. Ashford can’t think of a more appalling assistant than Helena Courtland, gossipy busybody he steadfastly avoids. But Helena sweeps into his home and his life before he can stop her, turning Ash’s precisely ordered world into a chaotic whirlwind.
October– Dear Duke by Anna Harrington — When the new Duke of Monmouth, decides to put through a canal, he isn’t prepared for an old mill owner and his stubborn—but beautiful—daughter to stand in his way. War is declared, and the only person who seems to understand him is the anonymous pen pal to whom he’s been pouring out his heart, a woman not at all who she seems…
November– Must Love Duke by Heather Snow — Lady Emmaline Paulson is destined to land a duke—at least that has been the expectation since she was a cherub faced babe. But she has no wish to live her life in a gilded cage, always on display. Besides, she already has her Duke—an adorable Cavalier King Charles spaniel pup she rescued from the Serpentine with the help of a handsome stranger. Maxwell Granville, heir to the Duke of Albemarle, wasn’t fishing for love—or fair maidens trying to save drowning puppies—that November afternoon. But that’s precisely what he found, IF he can convince Emmaline that her Duke isn’t the only duke she wants in her life…
December – The Mistletoe Duke by Sabrina York — The Duchess of Devon can’t think of a better way to tempt her widowed son into marrying again, than to throw a Christmas Ball. And there simply must be mistletoe everywhere! But it’s not until Jonathan meets his mother’s humble companion under the mistletoe, that fireworks erupt.
January – Dueling with the Duke by Eileen Dreyer — When Adam Marrick, Duke of Rothray, shows up on Georgie Grace’s doorstep in rural Dorset, she thinks it is to acquaint himself with his cousin James’s widow and child. Instead the duke brings the news that Georgie’s four-year-old daughter Lilly Charlotte, whom James’s family disowned, has inherited a Scottish duchy. Unfortunately, the news has also brought danger to her door.
Amazon

READ AN EXCERPT!
The Mistletoe Duke By Sabrina York
When Jonathan Pembroke’s mother implores him to create a list of potential suitors for her beloved companion, Meg Chalmers, he does his best. Ah. How soon he regrets his largesse when he realizes he wants Meg for himself.
Then Mattingly went and said something that completely ruined his mood. “So tell us about this girl.” A simple question. Surely not one that should cause such an uprising of bile from his gut. Jonathan sipped his brandy. It tasted bitter. “Girl?” “You know.” St. Clare slapped him on the shoulder. “The one you mentioned in the invitation.” Mattingly fixed him with a somber gaze. “We’re both dying to know more about her. Especially if she comes recommended by you.” “Indeed,” St. Clare said. “I’ve been looking for a wife for months now, and cannot bear any of those flibberty-gibbets the mamas are proffering this season.” Mattingly grunted. “Mindless twits. Tell me she’s not mindless.” “No. No, she’s not mindless,” he said, but it was through tight lips. “Good.” Both of his friends grinned. “Is she pretty?” St. Clare asked hopefully. Jonathan shrugged. All of a sudden, he didn’t feel like talking Meg up. Not to these two. “She’s not bad.” “Not bad?” Christian blurted. “She’s gorgeous. Beautiful, intelligent eyes, lovely brown hair, and a face like a cameo—” “Surely not like a cameo,” Jonathan muttered, but no one was listening to him. His friends had turned all their attention to Christian, who continued on, for far too long, singing the praises of Meg Chalmers. Over and over and over again until Jonathan wanted to scream at him to be quiet. He couldn’t though. Couldn’t say anything. And the damned irony of the situation was that he was the one who had welcomed these wolves to his door. Judging from their expressions, they were going to eat Meg alive. In a good way, of course. In a matrimonial way. But Jonathan couldn’t still the unease in his belly or silence the howling of his soul at the thought of Meg choosing one of them. Marrying one of them. Because then he’d have to pretend to be happy for them. And that was a terrible prospect.
Amazon
Authors:

Enter now to win the Dukes by the Dozen Tiara!
a Rafflecopter giveaway
UncategorizedDefying TraditionIFTTT By Krista Butler