Today we have the release day blitz for The Protector by HelenKay Dimon! Check it out and get your copy today! 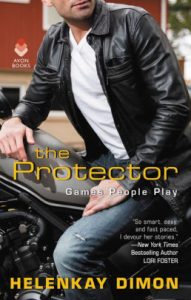 Salvation, Pennsylvania. The commune located in the small town was advertised as a modern Utopia: a place to live, share, and learn with other like-minded young people. Cate Pendleton’s sister was one of them. Now she’s dead—and Cate won’t rest until she finds out who killed her. Stonewalled at every turn, she approaches a DC Fixer for help and ends up with Damon Knox, a mysterious man with a secretive past. But Cate soon discovers that she not only needs Damon, she wants him, which isn’t good—for the attraction brewing between them will only lead to complications that can turn into danger . . .   Damon has tried to erase the hellish memories and the evil that happened in Salvation ever since he left a long time ago. Still, he can’t turn his back on Cate. As Damon works with Cate to uncover her sister’s killer, he finds himself drawn to her more and more. But how will she feel about him when she learns about his connection to the place?   Joining forces to uncover the truth, they must stay one step ahead of a cunning killer who’s bent on not being exposed.

Get Your Copy Now:

Can I just say I wish I had a Protector like Damon! Yes, he is a bit moody, has a bad view of himself but when it comes to something he wants… Well let’s just say he is a very stubborn man, and what is the best way to annoy that kind of man? You give him an even more determined and stubborn women to look out for.  Cate lost her sister in what was called an accident, but the details never made since to her. She needed answers and wouldn’t stop until she got them. I loved Cate in this book, she is strong, independent and knows what she wants. She knows she could be killed in her pursuit for answers but keeps looking, needing that closure. She also can go toe to toe with Damon which means I loved her even more. This is Book 4 in this series and I am definitely going back to read the rest! Now go one click this baby and curl up in your reading spot! I know you will love it.

Cate Pendleton dumped her grocery bags on the kitchen counter and glanced around the living room area of her small one-bedroom condo. Flattened pillows. Magazines spread across the coffee table. A blanket in a ball on the floor from where it slipped off her last night while she watched television. The remote stuffed between cushions. Everything was exactly where she left it when she took off on her store run an hour ago. But something struck her as off. She felt it rather than saw it. A violation of her scared space. A lingering menace. The sensation of unknown hands skimming over her things. A shiver skated through her at the thought. With her keys sticking between her fingers like a weapon, she walked around the condo, peeking in the closet and looking inside the bedroom. The journey ended back here she started. She approached the couch nice and slow. She listened for footsteps, but the only sound came from the hiss of her clunky, usually-malfunctioning icemaker. She leaned toward the cushions, just a bit, and sniffed. There it was. Aftershave. Faint, but present. Since a man hadn’t been in the condo for weeks the smell was out of place. And this was not the first time this had happened. She came home two days ago to the same scent. A mix of musk and orange. The last time it happened in the evening. This time in the morning. On that first day, she found her patio door unlocked. Living in a city, she didn’t take her personal safety for granted. Being two floors up, tucked behind rows of government buildings and a few blocks back from the National Air and Space Museum in downtown Washington, D.C., she kept her guard up. The neighborhood served as home to many congressional staffers. Traffic, both human and the car variety, moved in a steady beat. But she knew better than to assume everything was fine. She locked her doors. All of them and all the time, but someone got in. A punch of awareness moved though her as she brushed her fingertips over the arm of the chair. The idea of someone snooping through her stuff, standing in her space, made her gag. Last time nothing was stolen, so she skipped calling the police with that fear. Wrote the whole thing off as faulty memory. She knew something strange had happened, but she blocked it and pretended otherwise. But this was different. From the first whiff of that cologne, the trembling started deep down in her stomach, spun up to her head and would not stop. She forced her mind to focus. Someone kept getting in without leave much of a trail. They didn’t stick around, and for that she was grateful. Nothing stolen. Not obviously, anyway. Her sister. That’s what this had to be about. Cate thought back to the last six weeks and all the ground she’d covered. She poked around, asked uncomfortable questions and clearly upset someone. She got too close, which was exactly her plan. Maybe she uncovered some piece of information she hadn’t realized yet. But she would. If someone broke in thinking they’d figure out her strategy or grab every lead she’d collected, they miscalculated. No way would she make it that easy for anyone to destroy her work or derail her. After the first time this happened, she called the police but that led nowhere. A second call likely would end the same way. They would ignore her, write her off as the crazy one with the dead sister. Add to that her complaint wouldn’t pinpoint any clear evidence. This was about a sense of a presence, of being spooked, and she would become the new lunchtime story for the officers. But she knew. He had been there. He or she. The person knew how to get in and was playing with her. The next time she might come home too soon. Despite her worries and the downsides, she picked up the phone and dialed the one person who might be able to help her, the mysterious D.C. fixer. The guy no one ever saw who went by one name – Wren.

Catch Up On the Series!

HelenKay Dimon spent the years before becoming a romance author as a…divorce attorney. Not the usual transition, she knows. Good news is she now writes full time and is much happier. She has sold over forty novels and novellas to numerous publishers, including HarperCollins, Kensington, Harlequin, Penguin Random House, Riptide and Carina Press. Her nationally bestselling and award-winning books have been showcased in numerous venues and her books have twice been named “Red-Hot Reads” and excerpted in Cosmopolitan magazine. She is on the Board of Directors of the Romance Writers of America and teaches fiction writing at UC San Diego and MiraCosta College. You can learn more at her website: www.HelenKaydimon.com