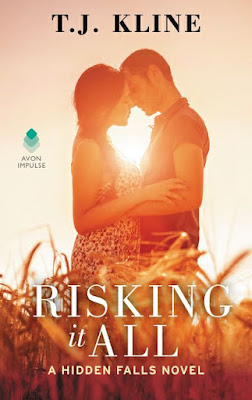 BLURB
Andrew McQuaid wasn’t always the local playboy. Once upon a time, he wanted to spend the rest of his life with one woman-Gia Mancuso. When he made a mistake and lost her, he decided he wasn’t meant to have a happy-ever-after. Now, Gia’s come back to town, with a baby in tow, and it might just mean a second chance at forever, if he can convince her that he never stopped loving her.
Ten years after leaving, Gia finds herself back in Hidden Falls. Between helping her ailing father save the family restaurant and taking care of the baby her sister left on her doorstep, she doesn’t have time for the man who once broke her heart. But Andrew is all grown-up now, in every single way. And the part of her that has always been his can’t quite say no to his tempting kisses.
Just when Gia begins to open her heart, a devastating secret emerges that threatens to destroy her family and any future with Andrew. Are they doomed to repeat the mistakes of their past or can Andrew convince Gia that she’s always been his one and only? 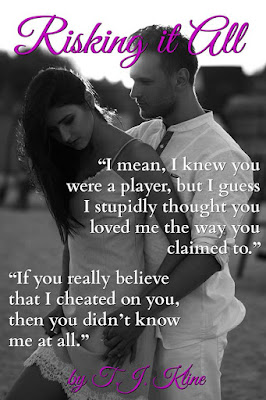 MY REVIEW:
Have you ever read the first book in a series and fell hard for a secondary character? I sure have, and it’s not the first in T.J Kline’s series that this happened to me. This time however I was very antsy for Andrew McQuaid’s book, he just stood out among the brothers. His banter, temper, and determination to stay a free bachelor just screamed ‘back story’. I can say I was not the least bit disappointed! T.J has a great insight into her characters and makes us fall hard for them.
Andrew had a love and lost her, the worst part was for ten years he had no idea why. He thought on it more than he wanted to but never came up with what he did wrong to drive the one woman for him away. When she comes back to town he is determined to find out once and for all!
Gia Mancuso has stayed away from her home town except for short visits. She has a good job that she has fought hard to get. Her family burned the need for respectability and family into her. So when she sister drops an unexpected problem on her, and her father is losing his fight with cancer, home is where she goes. She just hopes she can avoid Andrew.
There are secrets between these two that could not only destroy their second chance but also their families. I loved the complexity in this story, just when you think you have it figured out another curveball come at them. We get to spend more time with the McQuaid family and they are awesome! If there was a real family like this I would want to be friends with them. Gia is a very strong willed and organized woman and I just loved her for Andrew. He needed a woman that will keep him on his toes. Gia’s mother, now there is a piece of work! I wanted to shake her and make she see what she was doing to her daughters. Right to the end you still don’t know if she will change or not, I did like seeing the care and love Gia’s father showed his family. He refuses to back down but doesn’t need to use force. He is a kind, wise, and amazing man, he grabbed my heart and hung on.
All in all this book gave me everything I have come to expect from T.J. There is mystery, heart, trust broken, forgiveness, love, and so much more. You will not regret picking up this book! It can be read as a standalone but I recommend you read the first two books. It will make you love this family and town all the more! Go order your copy today, and set aside time to find out who Gia and Andrew were and are. Curl up in your favorite spot and enjoy! 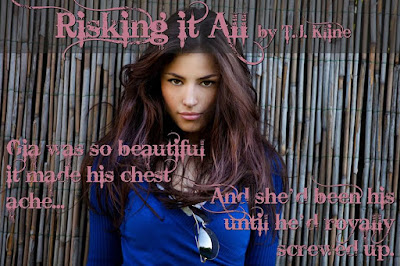 EXCERPT:
The quiet purr of her car engine and the haunting hoot of an owl in the woods on the side of the highway lulled her. Most people would be afraid – on a long stretch of deserted highway, darkness surrounding her with a cacophony of night sounds – but this was home, where she’d grown up, where she’d once been broken and had left the pieces behind. Gia could feel her body relaxing into the leather seat and braced her arm against the bottom on Bella’s car seat, trying desperately not to give in to the urge to sleep.
The soft crunch of gravel jerked her upright as headlights bathed the interior of her car in white light, blinding her. Reports of women being carjacked, kidnapped or murdered filled her mind and she hurried to snap the buckle of Bella’s seat again. Dropping the bottle, she lunged forward, attempting to climb over the console into the driver’s seat to get the hell away from whatever killer might be approaching her car.
It only took a few seconds to realize how big of a mistake she’d
made.
Gia had always been well-endowed but she’d never expected her curves to get her stuck partway between her front and back seats.
She wiggled, trying to twist sideways to make it easier to pull herself between the seats. Gripping the edge of the steering wheel, Gia used it for leverage, tucking one knee under her as she tried to force herself through. It was no use, she was hopelessly stuck, now unable to move forward or back. She was a miserable excuse for a guardian and prayed her stupidity wasn’t about to end with her and Bella on tomorrow’s news, murdered on the side of the highway, mere minutes from their destination.
She craned her neck to see the flash of red and blue lights washing through the back window of the car as a thin, white beam of light flashed through the window into her eyes. She held up a hand, trying to make out any of the features of what she prayed was really a cop, even if it meant someone would witness her embarrassing predicament. The back door opened and Gia heard a deep rumble of laughter.
“What brings you back to town, Gia?”
Gia closed her eyes, wishing she could crawl under her car. How was it possible that after nearly ten years of avoiding him, she was now caught in this position by the one man she never wanted to see again, the same one who’d broken her stupidly naive heart at eighteen.
“Andrew McQuaid,” she muttered to herself. He shined the light on her rear end and irritation welled. “You think instead of oogling my ass you might actually help me?”
She felt the hands that had carried her to her first heights of ecstasy reach for either side of her hips. The same hands she swore would never touch her again after she found out about the bastard’s cheating ways.
“Hey,” she squealed, trying to squirm away from his touch, willing herself to ignore the way her heart leapt into her throat. “What the hell are you doing?”
“Exactly what you asked me to do. I’m helping you.”
“Not like that?” She swung a hand at him, slapping her own butt in the process, but at least he let go of her.
“How, exactly, do you propose I help then?”
“I don’t know. You’re the cop.”
Andrew laughed, still leaning into her car, bent over awkwardly behind her. “Honey, I really don’t see any other way.”
She glared at him over her shoulder. “Don’t call me that.”
“Fine.” Andrew moved into the car, practically sitting in the back seat and slid one hand through an opening by her waist, in front of her bent knee with the other around her calf, managing to pull it out from under her. “There. I’m going to tip your right hip down but you’re going to have to manage to twist your shoulders to fit…um…” He searched for a polite term he could use for her boobs. “The girls through,” he finished with a chuckle.
Gia felt the rush of heat flood her face. “Let’s just get this over with.”
Andrew’s hands closed on her hips again, practically cupping her right butt cheek in his palm. “Bend your right knee and I’m going to pull on three. One…two…three.”
Gia managed to twist her body as Andrew pulled her backward and she slid through the space as if she’d never been stuck at all.
Andrew dropped into the seat, carrying her with him and Gia landed in his lap with one of his muscular forearms under her breasts, the other hand cupping her inner thigh, sending a blast of heat between her legs. It was the worst reaction she could have ever imagined having.
Until she realized that hard ridge beneath her rear wasn’t his gun 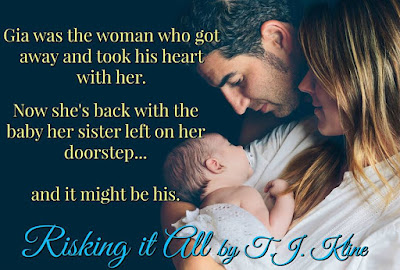 T. J. Kline was bitten by the horse bug early and began training horses at fourteen—as well as competing in rodeos and winning several rodeo queen competitions—but has always known writing was her first love. She also writes under the name Tina Klinesmith. In her spare time, she can be found spending as many hours as possible laughing hysterically with her husband, teens, and their menagerie of pets in Northern California. That is, when she isn’t running around the California Gold Country researching new stories.
CONNECT with T.J. KLINE:
WEBSITE
EMAIL
FACEBOOK
TWITTER
TUMBLR
PINTEREST
GOOGLE+ 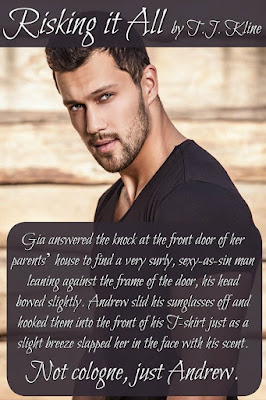