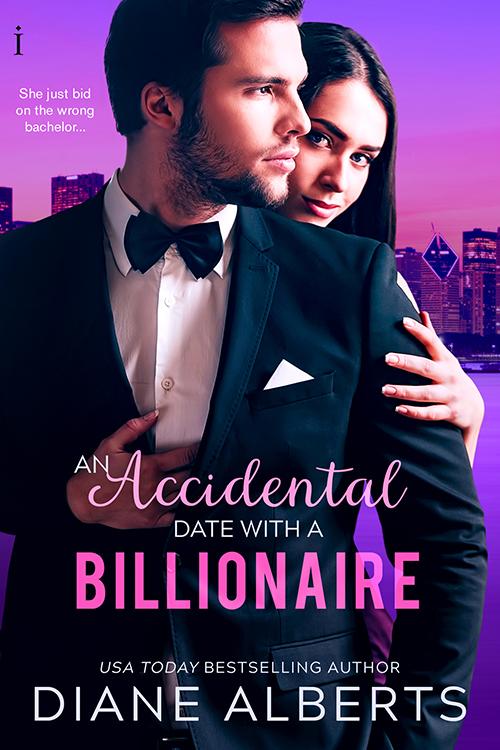 Samantha Taylor turned her back on her wealthy family to focus on social work. Those who know her think she’s the heart of kindness. Those who know her really well know she’s in a never-ending battle to make up for the harm her family’s companies inflict on the world. Which is how she finds herself at a charity bachelor auction of all places.

But oops, she was supposed to bid on her bff’s brother as a favor and accidentally bid on the wrong guy. Sue her for not being able to tell one stick-in-the-mud CEO from another.
Backstage, she goes to tell him not to worry about having to go through with a date or anything, but the oafish billionaire cuts her off dismissively. Looks her up and down, hands her a card with his assistant’s contact details, and reminds her that sex is definitely off the table.
Oh, she’ll call the assistant all right and have her make sure he wears jeans and comfortable shoes and to pick her up at seven a.m. The only “hammering” this guy is going to be doing is at Habitat for Humanity.
Too bad he turns out to be nothing like she expected.
Purchase: Amazon | Barnes & Noble | AppleBooks | Kobo

He might be a man who was known for his ruthlessness in the boardroom, and people might hate him for what he did, but he’d done all that with an honesty he never lost. He believed in honesty in all things, and this woman… She’d hurt his damn pride.
She was actually refusing to honor her date with him.
Why? He wasn’t good enough for her?
He slid his cockiest smirk into place, looking her up and down as if he didn’t like what he saw when he did. He’d been on defense for way too long with Sam. Time to switch the tables on her. “Listen, Ms. Matthews. I came here to help a good cause, and you bid on me. If you only wanted to bid on one person, maybe you should have paid attention to the announcer, so a mistake like this could have been avoided in the first place?”
Her jaw dropped.
“Furthermore, you have my contact information on that card. When you pull yourself together, feel free to call my assistant and let her know where you want me, and when.” He bowed at her, holding her shocked gaze. “Call me. Don’t call me. I don’t really give a damn. Either way, my job here is done. I got a chick to pay for the privilege of dating me for a night to help some sick kids get proper care.”
Every word that came out of his mouth made her grow stiffer with rage. By the time he was finished, her face had flushed red, and she was seconds from spitting fire at him.
Good. He wasn’t too happy with her, either.
“The privilege?” she sputtered.
“Yes. Privilege.” He cocked his head to the side. She was even more beautiful when angry. Shit. “After all, you wouldn’t have bid that much on a pot-bellied balding forty-something year old man in a sweat suit, now would you have?”
She pressed her mouth into a thin line. “Actually—”
He walked past her to the woman behind the table, who watched their exchange with a slack jaw. “Are you the one who takes the payment?”
She closed her mouth, nodding frantically. “Yes.”
Pulling his wallet out, he handed her a wad of cash, not even bothering to count it. “Take this as payment for my date, since she clearly has no intention of paying.”
Samantha gasped behind her. “I never said—”
“Thank you,” the worker said, beaming at him. “But this is too much.”
He bowed. “Accept it as a private donation.”
He might be an asshole, and he might not want to be here, but he’d be damned if he didn’t bring in the money he was supposed to for this charity. If Samantha refused to pay for him, then it was obvious he would have to do it himself. At least it got him off the hook for a date he hadn’t wanted to go on in the first place.
Samantha touched his arm. “Mr. Jennings—”
“No need to thank me. It’s done.” He pulled free of her touch. “I’d like to say it was nice meeting you, Ms. Matthews, but…?”
With that, he spun on his heel and left.
After all, he’d been raised to stay quiet if he had nothing nice to say.
He only made it a few steps before a hand on his arm stopped him. “Excuse me, Mr. Jennings—”
“Taylor,” he corrected, facing her again. She let go of him, but somehow, he still felt her touch through his clothing. “My name is Taylor.”
“Mr. Jennings,” she said, stressing his last name as she crossed her arms. “I don’t know who you think you are, but I assure you that you’re not worth the kind of money I paid for you.”
He cocked a brow. “You didn’t pay anything for me, Samantha. I paid for myself—and personally, I feel I got a hell of a bargain.”

REVIEW:
Samantha and Taylor were phenomenal together! This book had me laughing and yelling in my head and sometimes out loud. I wanted to shake both characters and hug them, LOL yes, it is that good. You will love the back and forth they give one another and the lesion to not judge a gorgeous rich man by his money. Taylor thinks he always must stay in control; he never lets his emotions or temper out of check. That is until he meets Samantha, all she wants is him to let loose a bit, not have to manage every situation. Yet even with the differences between them they are explosive in the one area that they can agree on, Bed. This leads to more time spent together on their “first date” because neither want a second. To understand this fully you will need to buy the book and read it. I will say this is the first book I have read by Diane Alberts and I was not disappointed by any shape or form. So please trust me and go buy the book, curl up in your favorite spot and enjoy Samantha and Taylors story.

Diane Alberts is a USA TODAY bestselling Contemporary Romance author with Entangled Publishing. Under the name Jen McLaughlin, she also writes New York Times, USA TODAY, and Wall Street Journal bestselling books with Penguin RandomHouse. She was mentioned in Forbes alongside E. L. James as one of the breakout independent authors to dominate the bestselling lists. Diane is represented by Louise Fury at The Bent Agency. Diane has always been a dreamer with a vivid imagination, but it wasn’t until 2011 that she put her pen where her brain was, and became a published author. Since receiving her first contract offer, she has yet to stop writing. Though she lives in the mountains, she really wishes she was surrounded by a hot, sunny beach with crystal clear water. She lives in Northeast Pennsylvania with her four kids, a husband, a schnauzer mutt, and three cats. Her goal is to write so many fantastic stories that even a non-romance reader will know her name.
Connect: Site | Facebook | Twitter | Goodreads