Today we are celebrating the release of LIAR by Stephanie St. Klaire! This is a Faux-mance novel you will not want to put down! You can purchase it now for only $2.99 or read it for FREE in KindleUnlimited!

Sign up for Stephanie’s newsletter for exclusive news and details about the book. 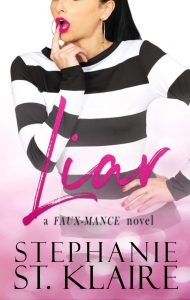 Fake it until you make it. That was the mantra Cori Dash chanted as she chased a big city dream. The more you tell people you’re on top of the world, the more they believe it – just like they believed the embellished image she sold them with her knock off designer facade. It wasn’t lying if the truth stood somewhere in the middle – and she didn’t get caught.

Dominic Blackthorne owned half of that big city…and a reputation. Rather than dispel rumors or show the world the real Nick, he let his own fake image run free. Until Cori Dash – the only person who told him exactly how it was, even if it stung.

When Cori is faced with her ex-fiance, now engaged to her ex-best friend, it’s game on. In her boldest move yet, she concocts her biggest lie to date by introducing the first handsome stranger that walks by as her new fiancé. Happy to play the part, Nick is already planning the fake wedding of her dreams.

You know what they say about lying – the truth always comes out – and it hurts. Especially when Cori finds out she isn’t the biggest Liar in this game, and she’s been out played. 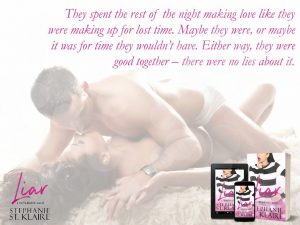 What a fun fast passed book! I managed to read this in about 2 and half days and that included me working my full time job in between. It also shows you how addicting the book was, I couldn’t put it down. I needed to know what new adventure Nick and Cori would have next.  Cori was determined to never loose who she was at her core, yes on the outside people saw one thing but she couldn’t hide everything. Nick was attracted and surprised when Cori grabbed him and wanted to pretend to be engaged. It was fun to read about how well these tow fit together. Nick just seemed to know what Cori needed without too much help. I also loved the supporting characters in this story, her best friend and security guird who could see how much she needed to let her walls down and let Nick in for real. All in all it was the kind of book that made me sigh with contentment when it was finished. I am not done with this author and can’t wait to read more. Stephanie has released this book into the wild so go click buy right now! Curl up in your favorite spot and enjoy the fun and schemes of Nick and Cori.
**I was presented with a free ARC copy by the author to give an honest review.** 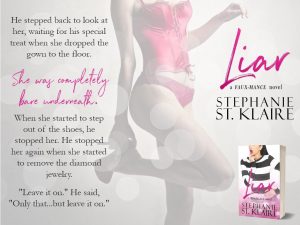 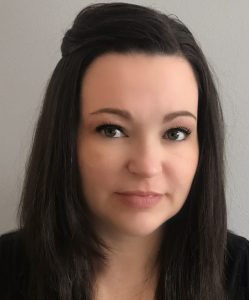 Stephanie St. Klaire is a Pacific Northwest native currently living in Portland, Oregon with her husband, five children, and two ferocious lap dogs that are used to the finer things in life like sleeping all day. When she isn’t writing, she can usually be found with a plate full of taco’s, a side of bean dip, and probably some gummy bears while being a little bit hippy and a lot bit busy mom’ing and wife’ing. When she’s not tossing around gritty crime show inspired serial killers and diabolical bad guys, she likes to make people pee their pants a little with a good romcom. Sometimes, her worlds collide, and she writes really funny stuff right before she kills people off on the pages! She loves murder and mayhem as much as a good laugh and HEA! That’s why she’s a die-hard Hallmark junky but loves her gritty crime shows – balance! Stephanie has always been a story teller, with the gift of “gab”, and a life-long goal to be a writer. Unfortunate circumstances with her health, finally afforded her the time to do so. Irony at its best, she began writing her first novel at an adverse time, to escape her circumstance and explore the stories in her imagination for relief. She is happy to share those stories with her readers, and bring a little fun, entertainment, and of course smexy characters to the pages. Follow Stephanie St. Klaire on Social media to learn more about her, how often she really eats taco’s, and to keep up with her work.
AUTHOR LINKS:
Sign up for Stephanie’s Newsletter
Website | Twitter | Facebook | Goodreads | Instagram | Amazon 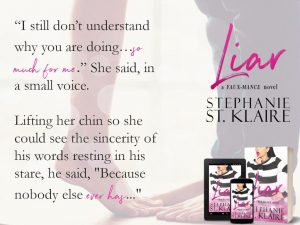