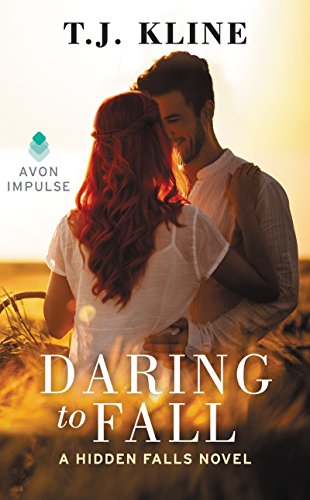 About:
Emma Jordan has returned home after her father’s death to run the animal sanctuary that had been his legacy. But strange things start happening, and it seems that someone is out to shut her down, someone who doesn’t mind putting lives in jeopardy to see it through. When Hidden Falls’ sexiest fireman starts to ask questions, Emma needs to make sure his charm doesn’t distract her from keeping her dreams alive.
Ben McQuaid has an obligation as a local fireman to protect the community, even from a well-meaning wildlife veterinarian who’s in way over her head. But, it’s becoming hard to keep his loyalty to the town and his desire for the pretty vet separate. As Ben and Emma become caught in a dangerous game of cat and mouse, their feelings for each other are growing.
Will they let duty drive them apart or will they dare to fall?

MY REVIEW:
Who out there doesn’t like a romance story with a woman that can hold her own? What about one that doesn’t play the damsel in distress to get the guy? I know that it is a huge plus for me in a book, to know that the woman isn’t going to fall all over herself because a hot man shows up. Okay so this man is a fireman, is kind and in the first chapter saves a baby animal out of a tree. Where was I going with this… Oh right strong female leads.
Emma Jordan is just such a leader; she is a veterinarian and wild animal trainer who just took over her father’s animal sanctuary. Rumors are flying about her right away! Saying she can’t handle the place like her father did, that they wish they could feel safe. Emma wants to restore the sanctuary to what her and her father dreamed before his unexpected death. She has big plans but if the town keeps thinking ill of her, she has no idea how she can accomplish them.
Ben McQuaid is a sweet guy that has always wanted to help, it’s in his nature to look for people that need it and jump in. He found a job that lets him do this and he is a great fireman. He keeps up with what’s going on in town, helps the neighbors when asked. The best guy you could ask for in a tough situation. This has a down side for him when it comes to his love life. He tends to be drawn to “damsels in distress”. Women who need rescuing from any and all issues, and then they break his heart. After his last disaster of a relationship he swore off complicated women. He wants one that is safe, predictable, your good girl next door.
When Ben meets Emma he is blown away at the women everyone in town keeps talking about. She is small, spunky and blushes when caught checking out his back side. Turn around is fare game when he starts taking a closer look at her as well. She is not the type of women he swore to find, she is not safe, or predictable. Emma Jordan keeps him guessing and on his toes. The problem is no matter how many times he tells himself to stay away he can’t. When the fire they start only grows hotter between them, they give into it only to discover it only burns hotter. Ben realizes he wants Emma but not only in his bed, she refuses to give in and pushed Ben away. You will need to read the book to find out if the fireman finds his girl next door or finds a way to keep the women who sets him on fire. Curl up in your cozy spot for this nail bitter.

T. J. Kline was bitten by the horse bug early and began training horses at fourteen—as well as competing in rodeos and winning several rodeo queen competitions—but has always known writing was her first love. She also writes under the name Tina Klinesmith. In her spare time, she can be found spending as many hours as possible laughing hysterically with her husband, teens, and their menagerie of pets in Northern California. That is, when she isn’t running around the California Gold Country researching new stories.
Buy Links: