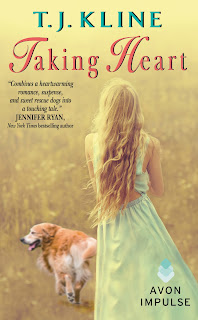 Blurb
T. J. Kline’s Healing Harts series continues as a soldier suffering from PTSD and a therapy dog trainer find that some scars can only be healed by love…
Julia Hart knows how much good she does training therapy dogs—it’s what helped her overcome her own trials after a relationship turned unexpectedly violent. But moving beyond her mistakes meant trusting only her family with her heart.
Dylan, a former soldier, has run out of hope for recovery. Plagued by nightmares and flashbacks, he doubts anything will help him overcome his PTSD. When his brother convinces him to try one last time, he agrees to get a therapy dog.
Dylan didn’t expect to find Julia or a chance for a “normal” future again. But when Julia’s attacker is released from prison, Dylan and Julia will have to face the past together.
Link to Follow Tour:  http://www.tastybooktours.com/2015/05/taking-heart-healing-harts-2-by-tj-kline.html
Goodreads Link: https://www.goodreads.com/book/show/23285838-taking-heart?from_search=true&search_version=service_impr

MY Review:
When I read a romance book, it is for many reasons. To escape into another world, place, or time. I have read them cause I am a romantic and love seeing love win out over all. I have even read them to write reviews and ended up not being able to put the book down. Taking Heart was one of my top reads because I NEEDED to read it, I was invested in the world T.J. had created and I couldn’t not read it. I had read teasers, blurbs and excerpts, all making it a dire thing that not another day go by before I read this book. Suffice it to say I couldn’t put it done, I started it at 11pm Tuesday night, put my girls down for naps and kept reading today. After diner and bed I sat to finish, it was an emotional book that had my full attention.
Julia Heart thinks she is broken after surviving a horrible incident in her past. He has invested all her time and energy into making her dog-training portion of the ranch a success. She trains dogs for all types of people including people suffering from PTSD. This leads to her meeting the Gage and Dylan. Gage wants his Brother Dylan to heal and be his old self or at least leave sleep through the night. He contacts Julia and she tells him to come check her ranch out, see if she can help. Dylan out main tough guy wants to end his life, he is the only one to survive his team in Afghanistan and can’t figure out why. His life is hell and nothing he does has made it better. To appease his brother he goes to meet Julia and try to see if a dog will help.
With both lead characters having emotional pasts, this book is full of the heartstrings being pulled. You want them together so bad but honestly don’t know if they can move forward and leave the baggage behind. In a lot of T.J.’s books you have a lighter note mixed with emotion, this one was emotion with some well-earned laughs. You know the kind when you wait for the hearts to heal enough to allow the things we take for granted to seep in. Laughter, smiling, love, kindness without an ulterior motive. Dylan suffers from survivor’s guilt and doesn’t think he deserves to have anything good. Please don’t misunderstand my review, there are light and happy moments, heat between Dylan and Julia, protectiveness from Julia’s brother and a lot more. I hope you love this book as much as I did!

Excerpt:
“Tomorrow?” Dylan stared at his brother. “Have you lost your mind? We can’t leave in the morning.”
“Dylan, it’s already arranged. All you need to do is pack.”
Dylan had hoped that letting his brother do the legwork would dissuade him from this pointless pursuit. There was nothing a dog, even a therapy dog, could do. He’d already seen the brochures and read the information about how they were supposed to help with mood swings and anxiety, but if pills and alcohol couldn’t touch them, how was an animal going to do anything? He ran a hand over his beard-roughened jaw, his fingers running over the marred flesh on his neck. The burns and scars had been covered with intricately colored tribal tattoos starting behind his ear, but they didn’t make the truth hurt any less. He’d been the only man from his unit to survive the attack, and he still wasn’t sure why. This wasn’t living.
Dylan saw the hope in Gage’s eyes. He really thought a dog was going to make a difference? Whatever. It wasn’t worth fighting over. If Gage wanted to take a few weeks off work and stay at some training facility, fine. He’d see soon enough that this wouldn’t help.
“Fine.” Dylan shook his head in defeat and ran a hand over his close-shaven head. “I’ll have to call Dr. Miller and let him know.”
“I’ve already called him.” Gage tossed a basket of Dylan’s laundry onto his bed and began to fold it. “For the record, he thinks it’s a great idea.”
Dylan clenched his jaw. He appreciated his brother’s help, but he wasn’t completely incompetent. He felt the always-present anger simmering just below the surface. “I’m not an invalid. I can still do my own laundry.”
Gage looked up, eyeing him curiously. “I know you can, Dylan. I wasn’t implying you couldn’t.”
“Then stop coddling me like I’m going to break. I’m already broken.” Dylan felt the familiar curtain of rage coming down over him, but he was helpless to stop it. It didn’t matter how many pills they gave him or how many behavioral exercises he tried, when an episode came on it was like a flash flood that drowned him every time. He reached out, throwing the hamper from the bed. “This is pointless.”
“Dylan . . .”
“You know damn well I can’t get on a plane, what that will do to me.”
“Fine, we’ll drive. It’s only all the way across the country.” Gage grabbed a pillow from the bed and slapped it into his brother’s hands. “You want to be pissed? Go ahead. You want to throw things? Be my guest. But use this, and you clean up whatever mess you make.” Gage turned on his heel and left the room.
It wasn’t the reaction Dylan expected. But instead of cooling, the storm inside him built, gaining momentum until he felt it swirling in his chest. He growled in rage, throwing the pillow at the wall and looking around the room for something else to throw. It only pissed him off more that every surface was already cleared. His brother had learned that lesson after Dylan’s last episode. He clenched his fists, trying to still the fury building within. Every muscle in Dylan’s body seemed to tense as he fought for control, bracing his fists on each side of the door frame. He couldn’t stop his fist when it rose of its own accord and slammed against the wall, putting a hole in it.
The pain radiating up his arm was enough to shake him from his fury, but self-loathing filled the vacuum left behind once his anger dissipated. He backed up until his legs hit the bed. His knees lost strength, unable to hold him as the adrenaline left him weak, and he dropped to sit on the edge of the mattress. Dylan looked at the bottle of pills on his nightstand, sweet oblivion that would make him forget, at least for a short while.
Just this once.
It was a lie. It wasn’t the first time he’d made that promise to himself, and he was sure it wouldn’t be the last, but he wasn’t about to take the steps down that dark path again. He looked away. He wouldn’t cave. Dylan buried his forehead in his hands, rubbing at his temples with his fingers, his right hand skimming the scar that ran from his temple to the back of his ear. He’d have been better off if that bullet had killed him. 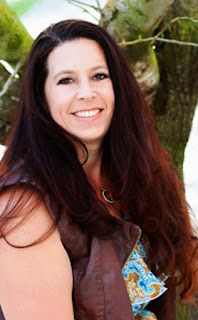 Author Info
T. J. Kline was raised competing in rodeos and rodeo queen competitions since the age of 14, She has thorough knowledge of the sport as well as the culture involved. She has had several articles about rodeo published in the past in small periodicals as well as a more recent how-to article for RevWriter. She is also an avid reader and book reviewer for both Tyndale and Multnomah.
Author Links:  Website | Facebook | Twitter | Goodreads
Website:  http://tinaklinesmith.com/
Facebook: https://www.facebook.com/WriterTJKline
Twitter:  https://twitter.com/WriterTJKline
GoodReads:  https://www.goodreads.com/author/show/7558685.T_J_Kline
@avonimpulse, @avonRomance, @Tastybooktours, #avonaddicts, #tjkline, T.J Kline, taking heart By Allisia Wysong