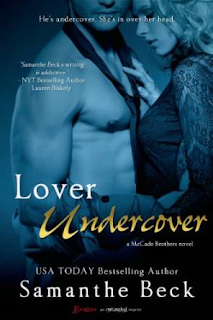 Book One: Undercover Lover
Kylie Roberts had a dream, she knew it would take a while to accomplish but knew if she stuck with it she could achieve it! She also swore as a young girl to never let a man into her life to derail those dreams like her mother had. So what in heavens name was she doing on a stage dancing at a gentlemen’s club! Why was her focus drawn to a sexy man sitting in the club? The answer was one word… Stacy, her twin sister ad given her an ultimatum. Dance or be homeless because they wouldn’t be able to afford their apartment without the high-end strip club tips. Kylie hates the lying, sneaking, and the hungry looks Trever McCade keeps giving her. When she stumbles upon a murder her life gets even more complicated.
Detective Trever McCade doesn’t frequent strip clubs, but one look at Stacy (really Kylie) and he can’t stay away. He uses the excuse that she is the key witness to a murder but really, he is drawn to her in a way that has never happened to him before. All their talks and dances give him a nagging feeling that something about her is not right. Once he realizes the twins have switched identities all becomes clear, but the killer is after “Stacy”, this means Kylie is in danger. Keeping her close when she keeps pushing him away is not easy. Trever wants to catch the killer and capture Kylie’s heart, Kylie is determined to keep their relationship purely physical. Who will win this fight and will it happen before the killer turns his anger onto Kylie instead of the men that she dances for?
From the first paragraph, I knew Samanthe had a winner on her hands, but all the stripping and private dances did have me pause. This was the first book I have read with a stripper as the main character, but Kylie being a virgin and dancing in a club was too intriguing to stop reading. Samanthe gave good descriptions and I could “see” into the world Kylie was trying to fit in. I loved reading about the relationships Kylie was able to build and that Trever saw her even through he disguise. This as a book I started reading because I wanted to read book 3 but had to start at the beginning (my preference, all three can be stand alones but they are better in order). Kylie and Trever are a great match and worth the read, I was not disappointed! 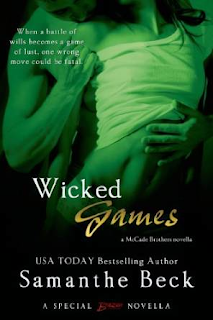 Book Two: Wicked Games
This is a novella telling the story of Stacy Roberts and Detective Ian Ford, Trever McCade’s partner. Stacy doesn’t want a steady relationship because she is waiting for the shoe to drop. Every time her life is going as planed someone she loves bales on her, the only one she can count on is herself and her twin Kylie. Ian loves Stacy, he understands why she keeps pushing him away but when she brakes things off completely he doesn’t give up. He gives her the space she says she needs, until a death threat is written to Stacy. At a huge Halloween party their passion and longing collides in a back room. Stacy gives in to Ian and her desire for him. When the emotions get to much she escapes, blending right into the crowd and possibly into the killers hands. Can Ian save her before he loses Stacy forever?
This novella was a fast read for me because I was on the edge of my seat wondering who wanted Stacy dead. I wanted Ian and her to get together but, for me it was the murder and threats that grabbed me. If you like a true thriller this one is good for you, there is love, anger, passion, and possible death involved. Samanthe wrote her screens in a way that it was like watching a move, you could see the acts being preformed and you wanted to yell at the characters to hurry up, watch out, and be careful! 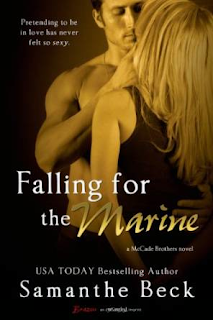 Book Three: Falling for the Marine
This is the book that started me on my journey to read this series. Samanthe Beck posted a teaser and I was obsessed. Every time I tried to read another book that scene she posted popped in my head, like a song that won’t get out of your head. I had to read the book to get the curiosity to stop. It took me longer then I wanted but I finished it! In amongst college classes, starting a website, my girls, and everything life was throwing at me I did finish it. I give it five plus stars for drawing me in and not letting go. I have found that Samanthe Beck is very good at this, I have yet to read one of her books that doesn’t keep me turning pages.
This is the story of Marine Michael McCade, Trever’s younger brother. One common thread between this book and Undercover Lover is the determination of the McCade brothers. When they find the women they love, they go to extreme lengths to prove to them they are not going anywhere. This is the same thing with Michael. He meets Chloe Kincaid in a very unexpected way, that imprints her on his memory. She is not his normal type, and he is everything Chloe swore to stay away from. Passion and fire can not be denied for long however. They problems occur when Michael wants Chloe to stay with him for more then just their physical connection. Chloe doesn’t want to stay in one spot, let alone get involved with a military man. She tried to tell this to Michael but nothing ever went the way she planed. For instance she didn’t plan on losing her job, being forced to accept Michaels offer to live with him, or having to pretend to be engaged to save Michael from being court marshaled. Her life is a mess, but even during our biggest messes great things can happen, that is if Chloe will let herself embrace them. This book is a rollercoaster of fun, Chloe is full of spunk and brings straight laced Michael out of his shell. The best of these books so far! 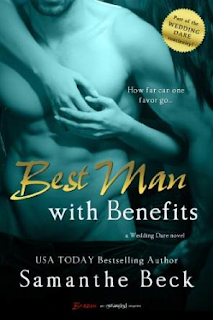 ***There is a number four book to this series, Best Man with Benefits, but this is also a part of The Wedding Dare series. I have not read it yet but as soon as I do you will see the review posted! This is youngest McCade brother Logan’s story.***
@avonRomance, #avonaddicts, #brazen, #romance, #samanthebeck, Samanthe Beck By Allisia Wysong