Blurb
Bee Carter has been invited to one of Chicago’s most glamorous charity balls. Attending this high-society event will be a dream come true, giving her the sense of belonging she’s always craved and memories she could never duplicate.
But it will also test her relationship. Because her date won’t be the man she believes she loves. Instead, she’ll be arriving on the tuxedo-clad arm of his rival, a man who has never stopped wanting her, desiring her touch, her kisses, and her passion.
How much will Bee risk to make a dream come true? Will her newfound love withstand the temptation of another, a man willing to do anything to claim her?
Link to Follow Tour:  http://www.tastybooktours.com/2015/03/sinful-rewards-11-billionaires-and.html

MY REVIEW:
I saved tis one(even though it drove me bonkers) until I had the last one to read soon after. Cynthia has done something here that for me is amazing. I have never read a book that was split into 12 parts and have it not get old. Series books are on different people so that keeps you reading but this series in all about three main characters. Since the start I have needed to know who Friendly was though I had my suspicions, had to know if Bee was going to follow her head or her heart. Book number 11 gets us closer to the last instalment, which means there is little mystery left. Or so you think. Cynthia has one more left, Bee’s man is acting odd, her mom keeps calling with vague  questions, and her man has yet to TELL her he loves her. I’m pretty sure I know how this will end but an still hooked to find out. This is why Cynthia Sax is a great writer, she keeps us thinking, asking questions, and I for one a sad to see this series end… Yet also excited to find out how Cynthia brings it all to a satisfying close.

“We’ll greet our new cat together,” Hawke assures me. The elevator doors open and we exit, our fingers linked together. “But after Gisele’s settled, I have to leave.” He brushes his shoulder against mine. “I’m personally supervising the venue’s preliminary security scan.”
“Do you usually supervise that?” I slow my pace to a crawl, wishing to spend more time with him.
“No.” Hawke matches my stride, his gait smooth and silent. “Normally, I assign the task to my team.”
But he isn’t tonight. I don’t delude myself that this personal attention is because of me. “There will be a lot of media at the event.”
Hawke’s lips flatten. “The media is the number one reason why our clients need security. If a hostile’s sole goal is to eliminate an individual, he’d avoid an event like this ball. He’d approach his target when she’s out of the spotlight and alone, minimizing casualties and the possibility of being apprehended.”
I consider his words. “I don’t have to worry about that type of hostile.” No one would specifically target me. I’m not that important. “That’s why I was safe in the French restaurant.”
“You were safer in the restaurant,” Hawke corrects. “You’re never completely safe.” He touches the barbed wire tattoo on his arm, a reminder of how random violence can be. “The media and an event like tonight’s ball attract a different type of hostile. They wish to make a statement. They do this by taking out their target and as many bystanders as possible, ensuring coverage of their cause.”
This is the scary world he lives in. I shiver. “That doesn’t happen very often.” I would have seen reports on the Internet, on TV.
“But it does happen.” My military man waves his passcard over our condo’s sensor. “You’ll obey my team tonight, Belinda.” He opens the door. “If they say move, you move.”
“I’ll follow orders.” I step over the threshold. There’s a speck of gravel on my previously cleaned floor. I frown. That shouldn’t be there. I cleaned the condo before I left. No one has entered it since then.
Or have they? I freeze, my body temperature dropping. “Hawke?” I whisper.
“Yes, love?” He moves forward and the door shuts behind him.
I extend my arms, preventing my big man from passing me. “Back into the hallway and call your team.” I keep my voice soft and calm, suppressing the terror swirling inside me. “Someone entered our condo while we were gone.” 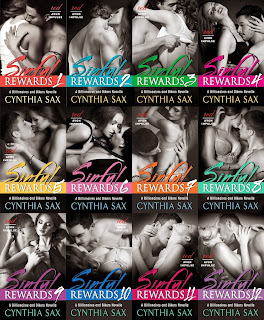 Author Info
Cynthia Sax lives in a world filled with magic and romance. Although her heroes may not always say, “I love you,” they will do anything for the women they adore. They live passionately. They play hard. They love the same women forever. Cynthia has loved the same wonderful man forever. Her supportive hubby offers himself up to the joys and pains of research while they travel the world together, meeting fascinating people and finding inspiration in exotic places such as Istanbul, Bali, and Chicago.
Author Links:  Website | Facebook | Twitter| Goodreads
Website:  http://cynthiasax.com/
Facebook:  https://www.facebook.com/cynthia.sax
Twitter:  https://twitter.com/CynthiaSax
Goodreads:  https://www.goodreads.com/author/show/3292466.Cynthia_Sax
@avonRomance, @Tastybooktours, #avonaddicts, #cynthiasax, #prizes, Cynthia Sax, Erotica, Sinful Rewards 11 By Allisia Wysong