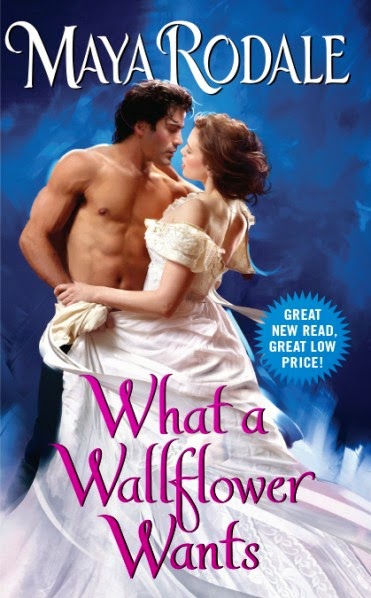 What a Wallflower Wants
Bad Boys & Wallflowers # 3
By: Maya Rodale
Releasing September 30th, 2014
Avon
Blurb
In the third novel in Maya Rodale’s charming Wallflower series, London’s Least Likely to Be Caught in a Compromising Position finds temptation in a devilishly handsome stranger . . .
Miss Prudence Merryweather Payton has a secret.
Everyone knows that she’s the only graduate from her finishing school to remain unwed on her fourth season-but no one knows why. With her romantic illusions shattered after being compromised against her will, Prudence accepts a proposal even though her betrothed is not exactly a knight in shining armor. When he cowardly pushes her out of their stagecoach to divert a highwayman, she vows never to trust another man again.
John Roark, Viscount Castleton, is nobody’s hero.
He’s a blue-eyed charmer with a mysterious past and ambitious plans for his future-that do not include a wife. When he finds himself stranded at a country inn with a captivating young woman, a delicate dance of seduction ensues. He knows he should keep his distance. And he definitely shouldn’t start falling in love with her.
When Prudence’s dark past comes back to haunt her, John must protect her-even though he risks revealing his own secrets that could destroy his future.

Book Excerpt:
Ever since her first season, Miss Prudence Merryweather Payton had known that she would never marry. By her third season, she had made peace with the sad truth that love and marriage were not in the cards for her. Which was fine. FINE.  Truly, she was not bothered in the slightest at the prospect of a long, boring spinsterhood. Why, think of all the needlepoint or charity work she might do. Or so she had thought. But that was before the invitation had arrived. A delicately-worded missive, written in an elegant script inviting her to the 100th anniversary of her finishing school, Lady Penelope’s Finishing School For Young Ladies of Fine Families. With that invitation came the mortifying and heartbreaking truth: no graduate had ever taken more than four seasons to land a husband.
Except for Prudence. Until recently, she not alone in her matrimonial failures—her friends Emma and Olivia were also Wallflowers with hardly any suitors among them. Prudence envisioned a future for the three of them, living happily in a cottage by the sea. She had known this invitation, this ball, this moment would come, but Prudence always thought she’d confront it with her very best friends by her side. But then Emma landed a Duke and Olivia found love with the most unlikely man. She was happy for her friends—truly. No one deserved love and happiness more than Emma and Olivia.
Now Prudence was on her own. The last wallflower.
My review of this amazing book!
Amazing! Brilliant! Daring and Brave!! Maya Rodale’s Wallflower series has been one of my ultimate favorites since the first. She has created her own world with facts and characters that you grow to love. If you loved her Writing Girls series you will be thrilled to know they are mentioned in each of these as well. Maya knows what her readers want and she never fails to deliver. Maya takes a daring step with this new book touching on a subject that was not talked about in the regency era and is still happening today.
Prudence our third wallflower had big dreams of grand gestures and parlors full of suitors for her first season. She dreamed that her first season would be for fun, dancing, flirting, and stealing a kiss or two. What she didn’t count on was being compromised and having all her dreams shattered. Prudence changed her dreams, made them into spending her life as a spinster with her other two wallflower friends. Then they found the romance and love she had wanted long ago. She was very happy for them but this forced her to do things she didn’t want to… Prudence tries to elope with a man she knows will not try to force his marital rights, what she didn’t count on was his cowardice. After escaping being offered as the “sacrifice” for a highwayman, walking miles in the sun and downpour she doesn’t think anything could get worse.
John Roark, Viscount Castleton, has been on a winning streak. All his dreams are so close he can taste them; nothing will stand in his way, except maybe the rain that won’t stop. This is however not the only reason that keeps him stranded at an inn in the middle of nowhere days from London, where he needs to be as soon as possible. John tried to give the soaking wet Prudence a ride but she had turned him down choosing to walk. He should be able to forget her, but she was just too much like the wounded animals he took care of as a child. The need for safety and protection, yet fight and stubbornness was an odd combination. John found he liked those things in a woman, but not just any women, he liked them in Prue. If only he could convince her he could be trusted. He knew she was hiding things but then again so was he; they both had secrets that could either bring them closer or push them apart forever.
You will have to buy this book to find out more about Prudence and her wild ride and see if John Roark, Viscount Castleton’s luck will hold out.

About Maya Rodale:
Maya Rodale began reading romance novels in college at her mother’s insistence and it wasn’t long before she was writing her own. Maya is now the author of multiple Regency historical romances. She lives in New York City with her darling dog and a rogue of her own.
Author Social Links:
Website:  www.mayarodale.com
Twitter: https://twitter.com/mayarodale
Facebook: https://www.facebook.com/mayarodalewriter
Goodreads https://www.goodreads.com/author/show/377744.Maya_Rodale
Link to Follow Tour: http://www.tastybooktours.com/2014/08/what-wallflower-wants-bad-boys.html

Avon is doing a drawing to win a Print Set of Maya’s Bad Boys & Wallflower Series. Just follow the link below to enter. Good luck!